Symptom
Clicking on Circle Definitions from the list or choosing Cancel or Update on specific circles results in “Invalid object name” error. 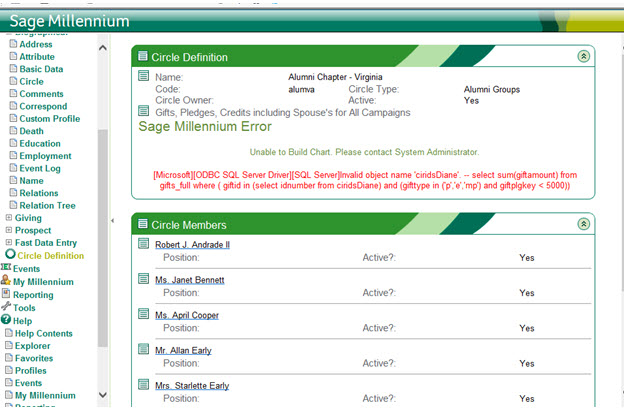 Cause
Clicking too fast using multiple clicks on circle definition.
Resolution
We were able to reproduce the error:[Microsoft][ODBC SQL Server Driver][SQL Server]Invalid object name 'username'. -- select sum(giftamount) from gifts_full where ( giftid in (select idnumber from ciridsjsalazar) and (gifttype in ('p','e','mp') and giftplgkey < 5000))
by either...
1)  Select the same circle from the list twice in rapid successiona) enter % into the circle manager searchb) in the resulting list of circles, click on the link for one of the circlesc) quickly (before the screen changes), click on the same circle link againd) ---> error occurs
or
2)  In the Update/Delete screen for a circle, click the Cancel or Update button twicea) enter % into the circle manager searchb) in the resulting list of circles, click on the link for one of the circlesc) wait for the circle to displayd) choose Update/Delete from the hoverover menue) click Cancel or Update f) quickly (before the screen changes) click the same button one or more additional times.
In all cases, I would guess that the code processing SQL data retrievals to display the circle (definition and members) starts processing on the first click (of the circle select-from-list, or redraw-after-cancel-or-update), and then that process is still in progress when a second one is started by the second click.   The process probably starts by deleting any old copy old the temp table of circle members ([username] in the above example) then creates a new table.  So the first process creates and populates the table, then the second process jumps in and deletes the temp table and before it recreates it, the first process tries to use the temp table in a subsequent select.
On the client's site, all interactions with circles (listing, viewing, updating, cancel, etc.) are VERY SLOW, so a) the users are likely to re-click links and buttons either out of impatience or because nothing seems to be happening so they think they might not have properly clicked the first timeb) the is a large window of time to get multiple clicks in before the screen updates
The client says other areas of Millennium are reasonably responsive... but the circle screens are very slow.  So in addition to fixing the bug causing the error, we might want to look at the SQL Select statements and see if they can be tuned at all.
*** We have been able to reproduce in local test systems in both 7.9.5 and 2013.   But because our systems are much faster you have to be quick with the double clicks and it is not as easy to reproduce as on this client's system. ***
Article Type
Product Defect
Product Line
Millennium
Product Module/Feature
Circle Definition
Product Version
2013.5
2013.4
2013.3
2013.2
2013.1
2013.0
Pre-2013
7.9.x
Database Engine
SQL Server 2008 R2 Express
Ranking